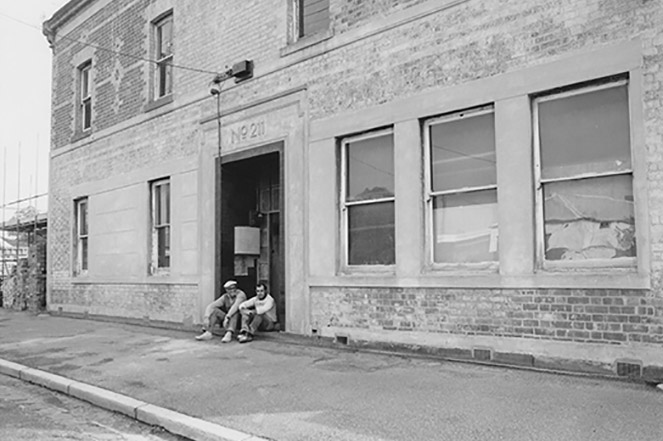 This story is told by South Port founding Committee member, Beris Campbell who, in 1983, was the head social worker at Port Melbourne Council.

The Port Melbourne rooming house, at 211 Princes Street, was owned by local businessman Jim Fletcher. He was a tall, dignified man, probably in his 80s, but quite reserved; I don’t remember ever calling him Jim, it was always Mr Fletcher.

Jim had married “a real pedigree Port Melbournite” and had bought the house because members of his wife’s family were residents and it had been under threat of closure. Mrs Fletcher cared for the residents, particularly the more elderly, occasionally seeking advice from me as the local social worker.

Jim wanted to sell the property but his wife was adamant that it should be retained as a rooming house. I suggested they offer the property to the Ministry so it could be maintained as a rooming house and managed by South Port.
Negotiations started in 1983 but dragged on for months, trying everybody’s patience, especially Jim Fletcher’s. Finally, the sale was approved in 1984.

Architects John Mantesso & Associates worked closely with the South Port committee on the design and renovation. The result was high-standard accommodation with 14 rooms, a spacious kitchen and dining area, a back garden for veggie growing, and a new caretaker’s flat. Locals, some of whom had known each other since school days, soon moved in, proud to be living in such good, secure accommodation.

It was an important event and a major achievement, South Port’s first rooming house in Port Melbourne and a classic example of a community working together for a great outcome.

Moving towards our long term goal of energy efficiency

South Port Community Housing Group would like to acknowledge that we operate here today on the land of the traditional owners of this land, the Yalukit Willam clan of the Boon Wurrung. We pay our respect to their elders, past and present. We recognise and respect the significance of their cultural heritage and relationship with the land as we work from the historic meeting place of Emerald Hill.